mindLAMP offers a variety of neurocognitive assessments in the form of games, which are native to the app. These will show up on the Assess page of the app, and performance scores can be displayed on the Prevent page.

Jewels replicates the Trail Making Tests, in which participants are asked to sequentially select numbered jewels in the correct ascending order.

The Trail Making Test, with its two subtypes A and B, typically used to screen for dementia and assess cognition. It evaluates visual and motor abilities, executive functioning, and set shifting (1). Evidence suggests that digital and computerized version of the pen-and-paper Trail Making Test reliably assess the same cognitive domains. (2, 3, 4). Trails A requires a patient to make a 'trail' connecting numbered circles, placed randomly on a single page, in ascending order. Trails B requires a patient to make a similar trail, but alternate between numbered and alphabetized circles.

mindLAMP offers its own digitized version of both version of the Trail Making Test, called Jewels. Here, the numbered circles are replaced by numbered jewels in both Jewels A and B. For Jewels B, instead of having alternating numbers and alphabets, the sets alternate between two differently shaped jewels. participants must select jewels starting from 1 in ascending order, within a given time limit. Participants are indicated which jewel shape they must begin at number 1 with. Here is an example of both Jewels A and B.

Jewels A (left) and B (right) Sample Game Play# 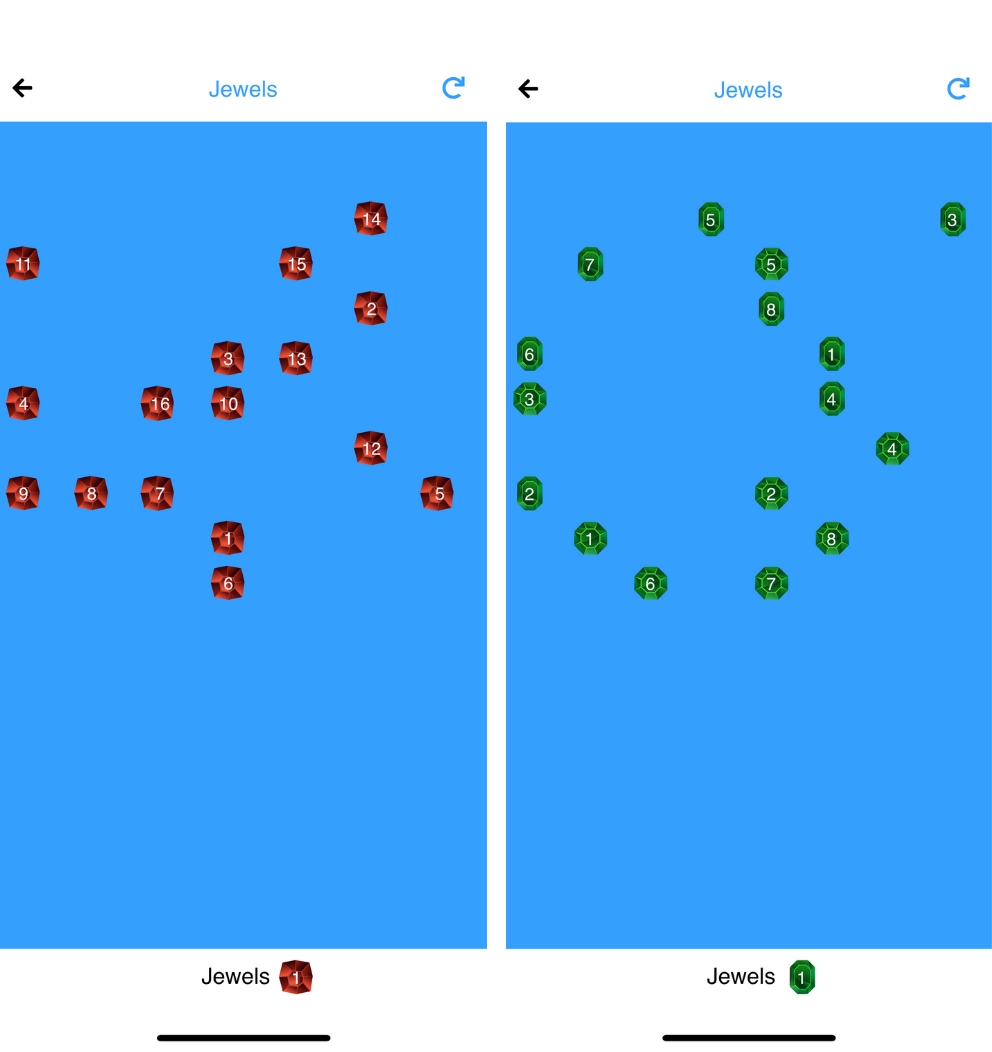 The digitized version offers the opportunity to customize Jewels, using the Activity settings: 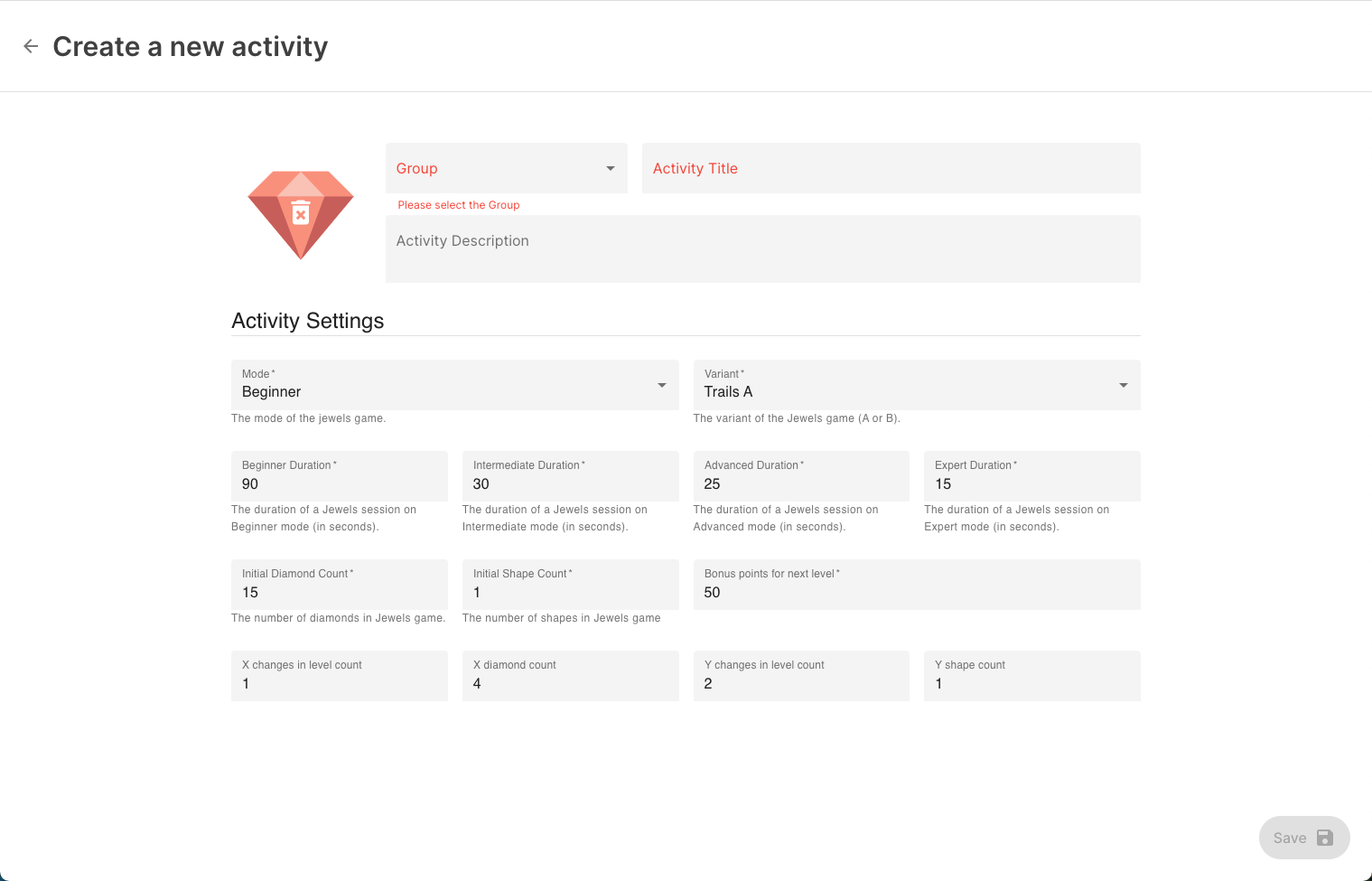 Scoring for both Jewels variants are out of a 100, with each incorrect jewel earning -2 point

Sample Instructions, Jewels A: "Tap the jewels in chronological order, starting with number 1."

Sample Instructions, Jewels B: "Look at the bottom of the screen to see which jewel to collect first. Tap number of 1 of that shape, and then number 1 of the second shape. Continue alternating the jewel pattern in chronological order until all of the jewels have been collected."

Spatial Span is a task that assess visuospatial working memory and memory capacity. In this game, white squares are arranged in a grid. Squares will 'light up' or change color to green, and then return to white, one square at a time. Participants are required to recall and reproduce the order in which squares in the grid light up. The task can be customized such that the patterns must be reproduced in the same order as cued, or in reverse of the order cued. At every subsequent level, the number of squares that light up increases.

The recall and reproduce task requires the visuospatial working memory. The backward variation also measures working memory, as some processing must be done before reproducing the pattern. Finally, the increasing number of squares to remember measures memory capacity. 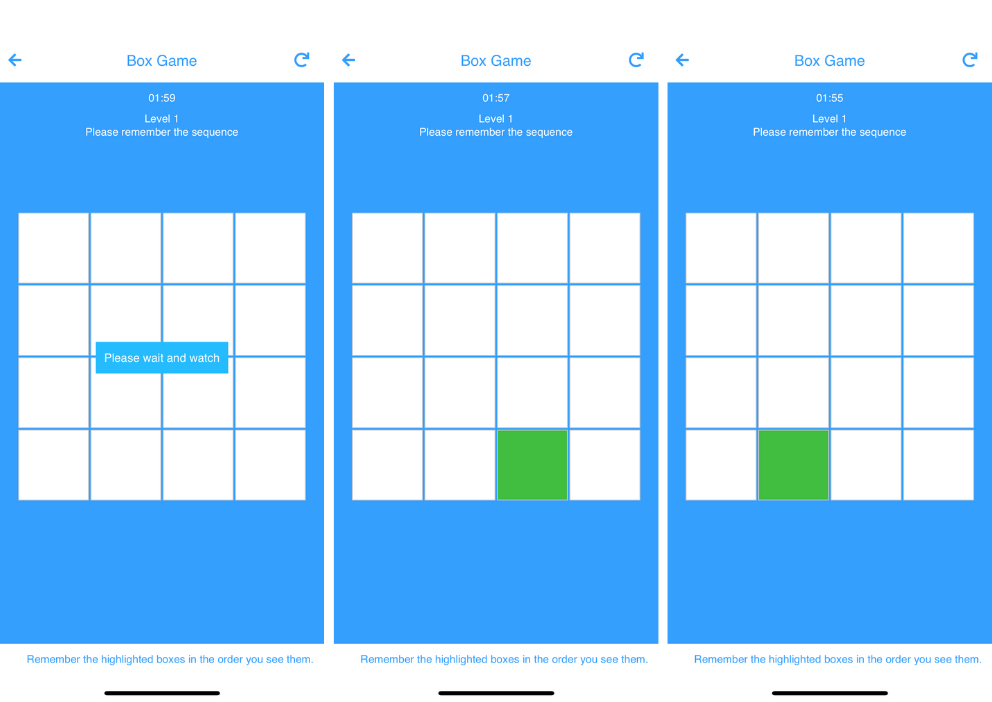 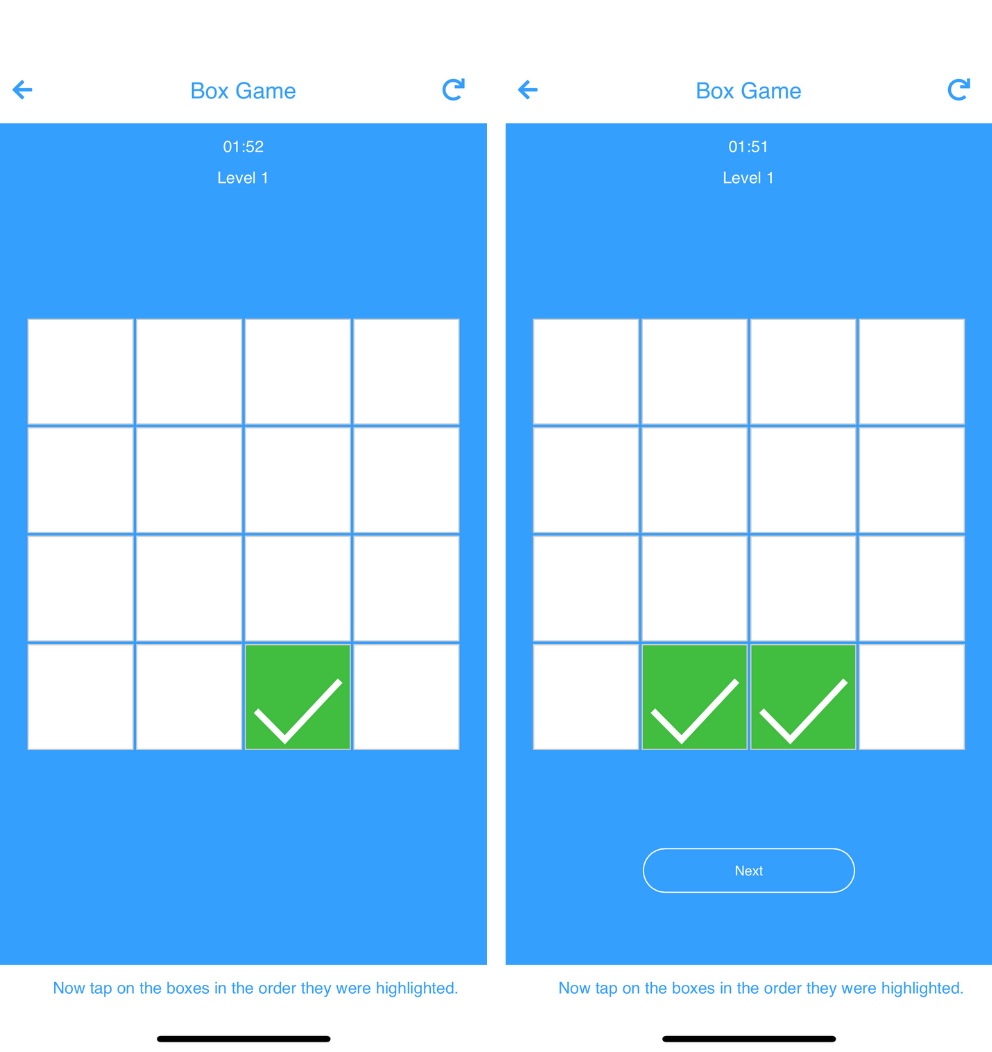 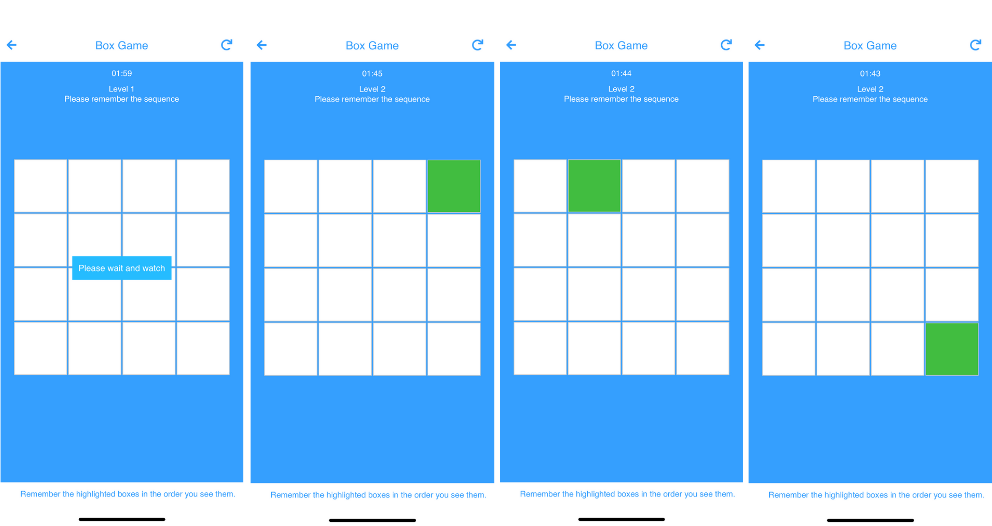 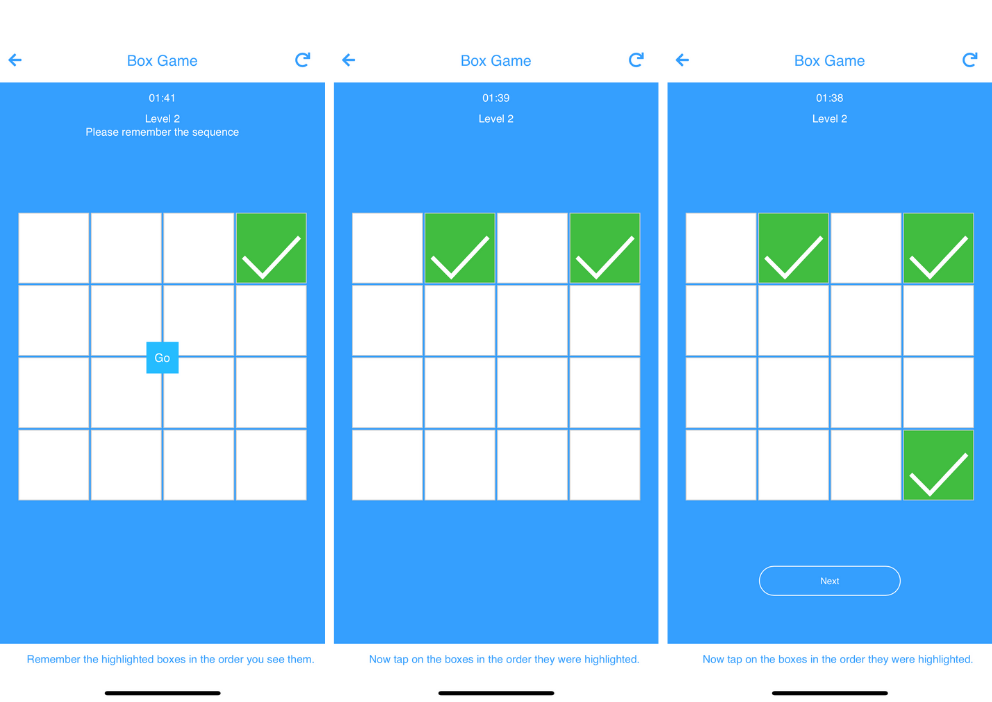 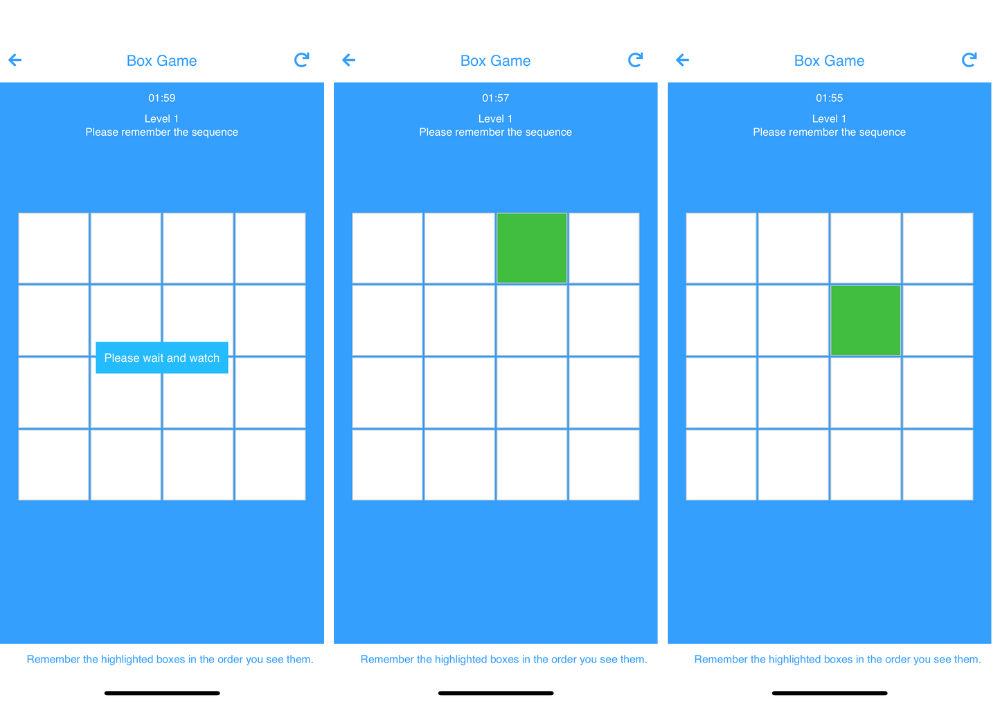 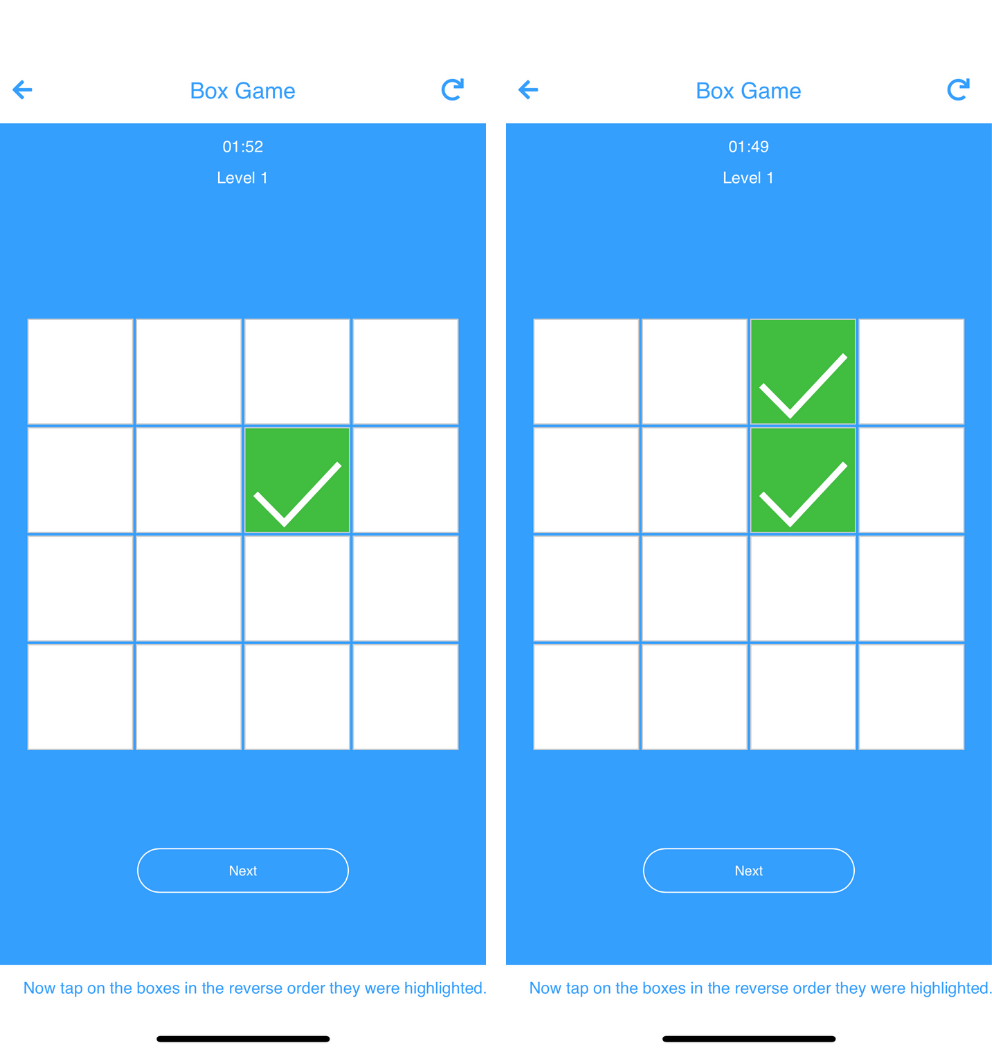 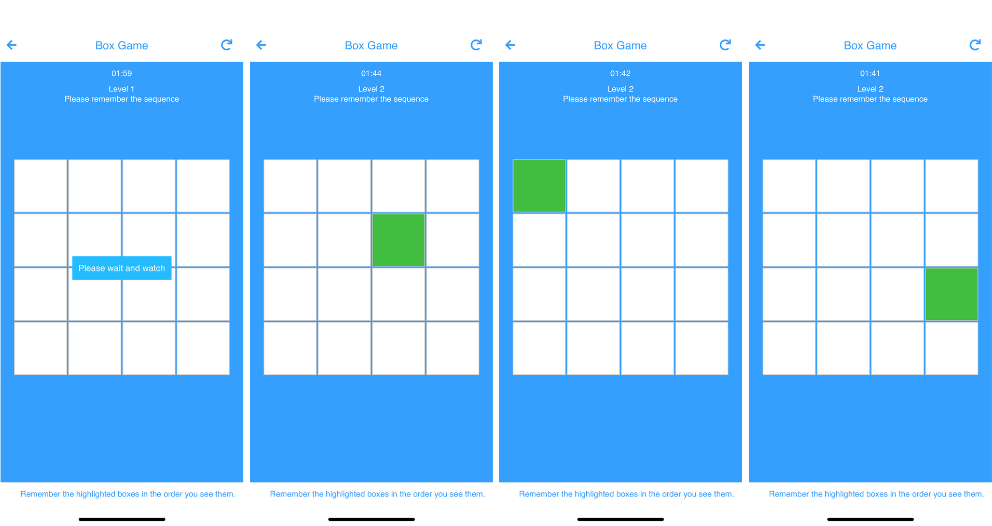 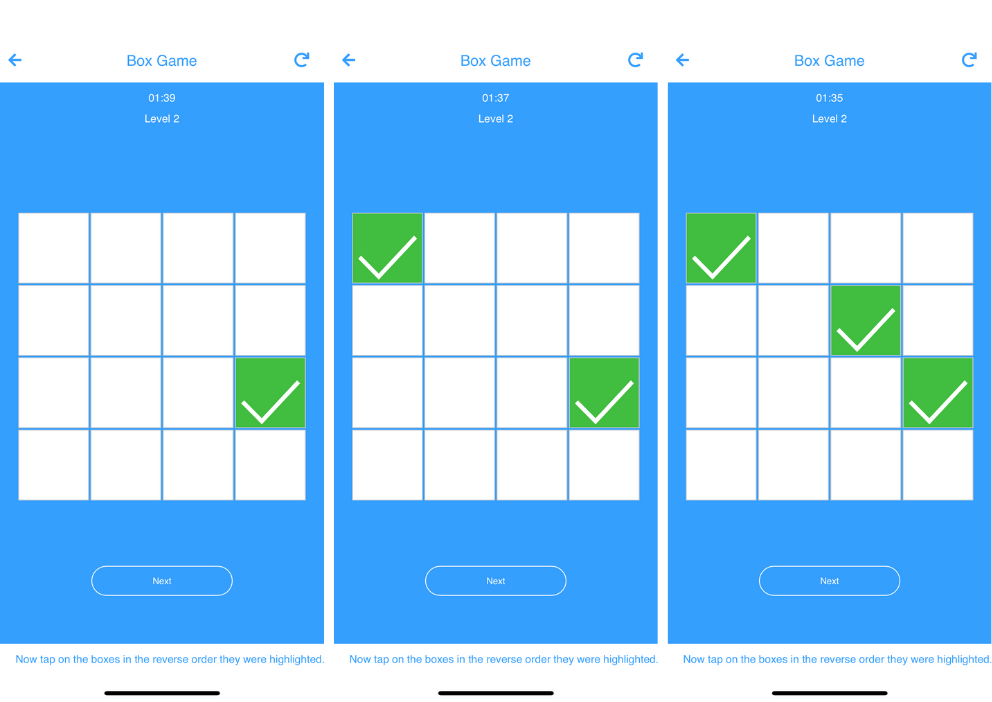 Each trial allows the user to play 5 levels as a default. Researchers and clinicians can designate whether the game is to be ordered Forward or Backward. 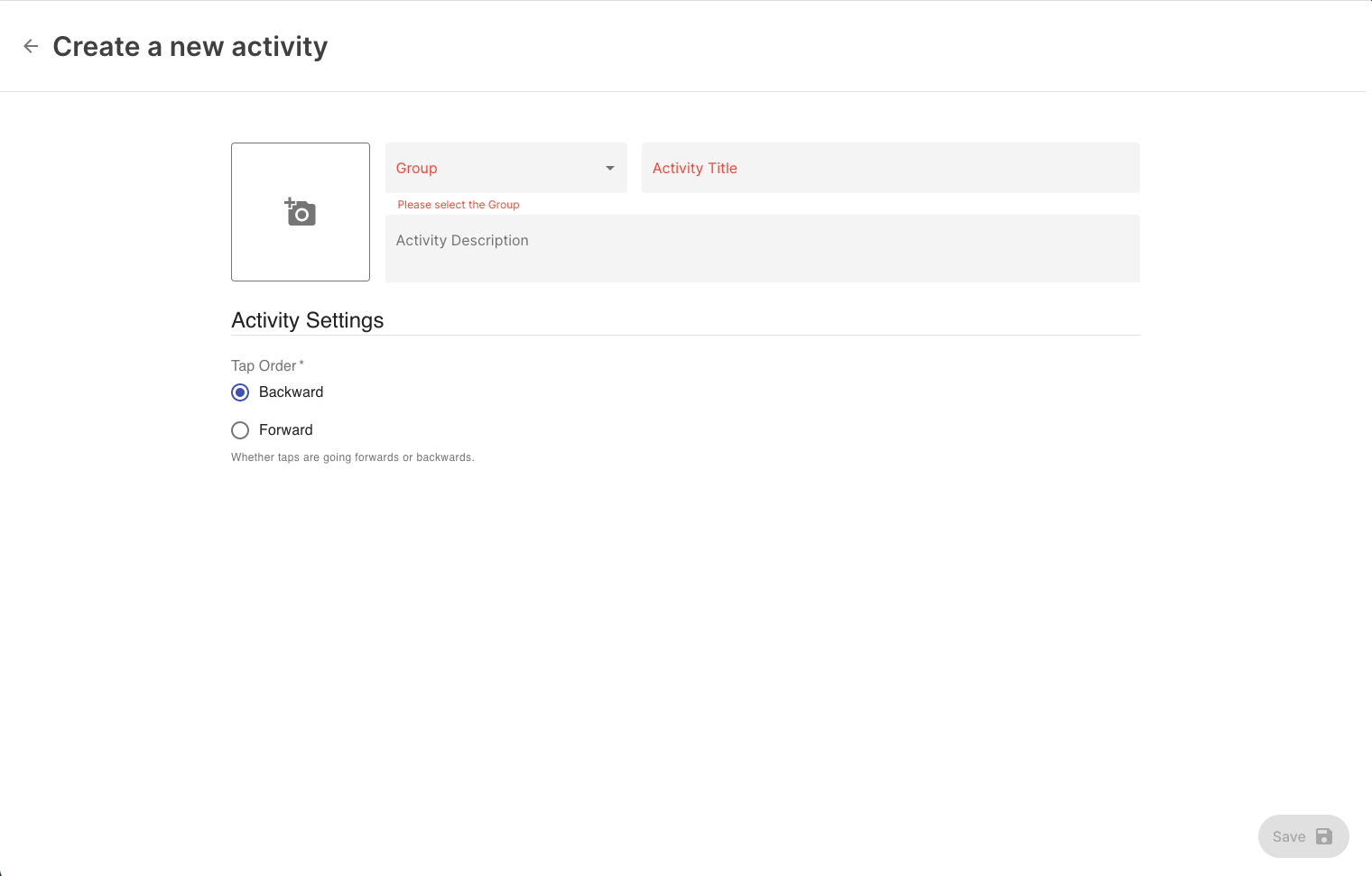 Forward Spatial Span: "You will see a grid of boxes. The boxes in a grid will light up in a certain order. Remember that order, and then tap the boxes in the same order in which they lit up. Each level will have more boxes light up in the sequence. See how far you can get!"

Backwards Spatial Span: "You will see a grid of boxes. The boxes in a grid will light up in a certain order. Remember that order, and then tap the boxes in the REVERSE order in which they lit up. Each level will have more boxes light up in the sequence. See how far you can get!"

In this task, participants are first shown a pattern of boxes. The boxes temporarily lift, to reveal the image of a dog or a cat behind some of them. Participants are asked to select the boxes which have . At higher levels, participants must switch whether to respond to the the cat or the dog.

The cat and dog cues assess response control and set-shifting as go/no-go stimuli: participants must respond to one, but not the other, and then change which to respond to and which to ignore when instructed.

The animal stimuli and the box together assess visual memory, working memory, and attention: each cue is only briefly visible 'behind' the boxes, so participants must attend to the cues, remember the position of each stimulus, and then recall the position to select the correct boxes. They must also remember increasingly more cues at each subsequent trial within a level. 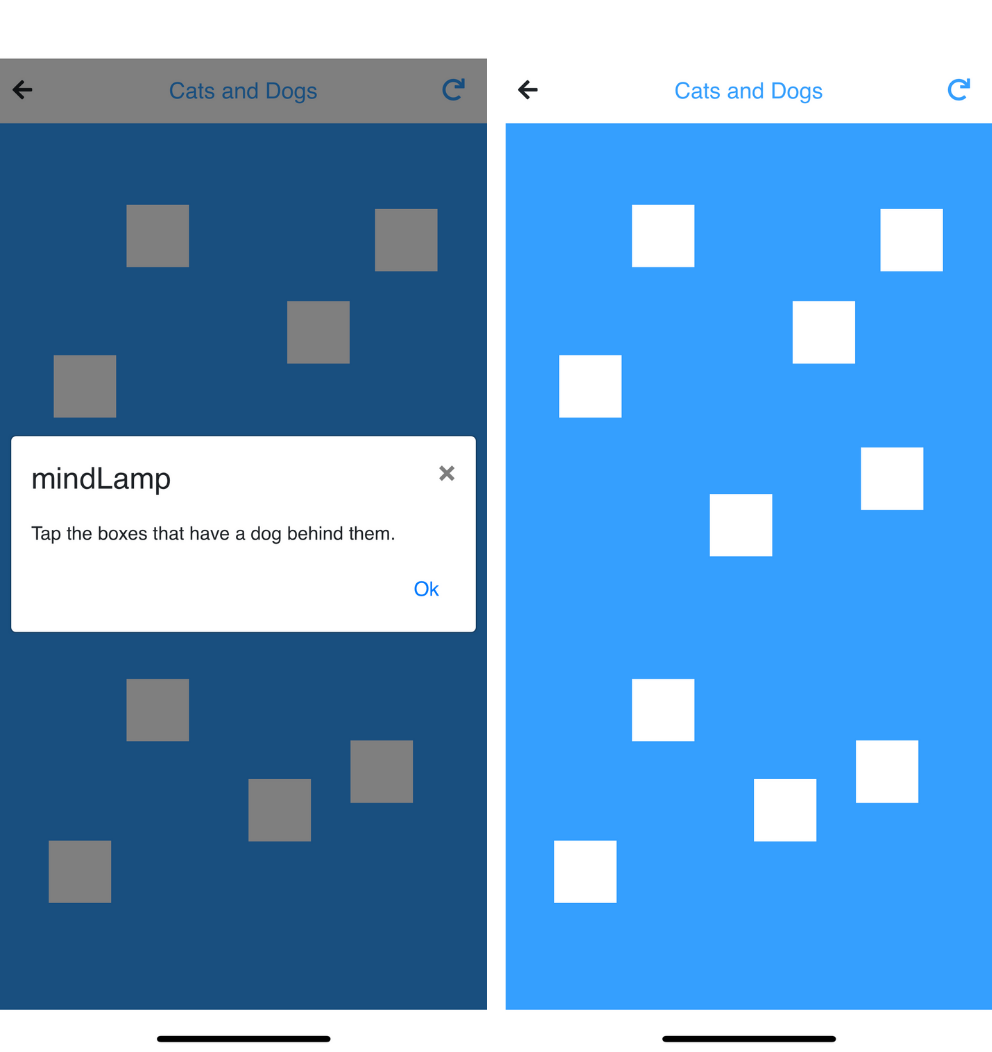 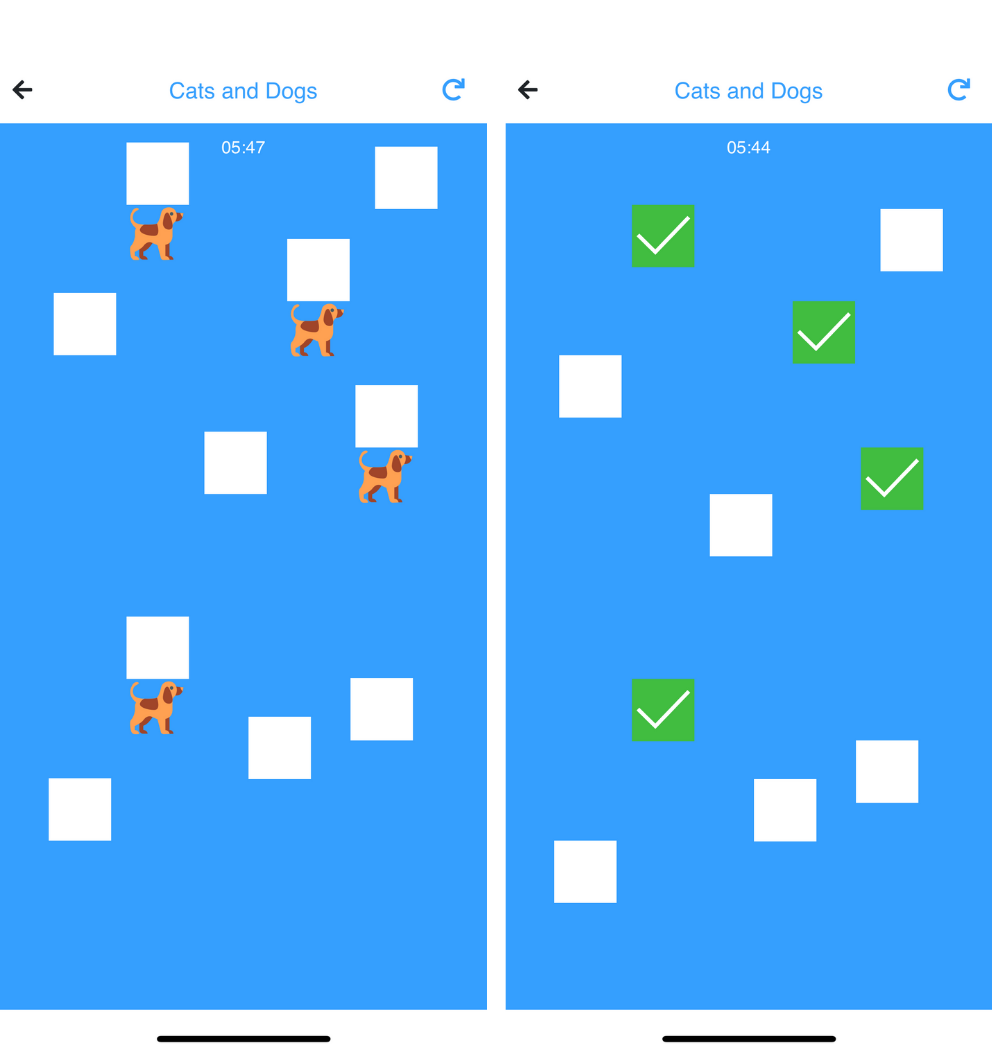 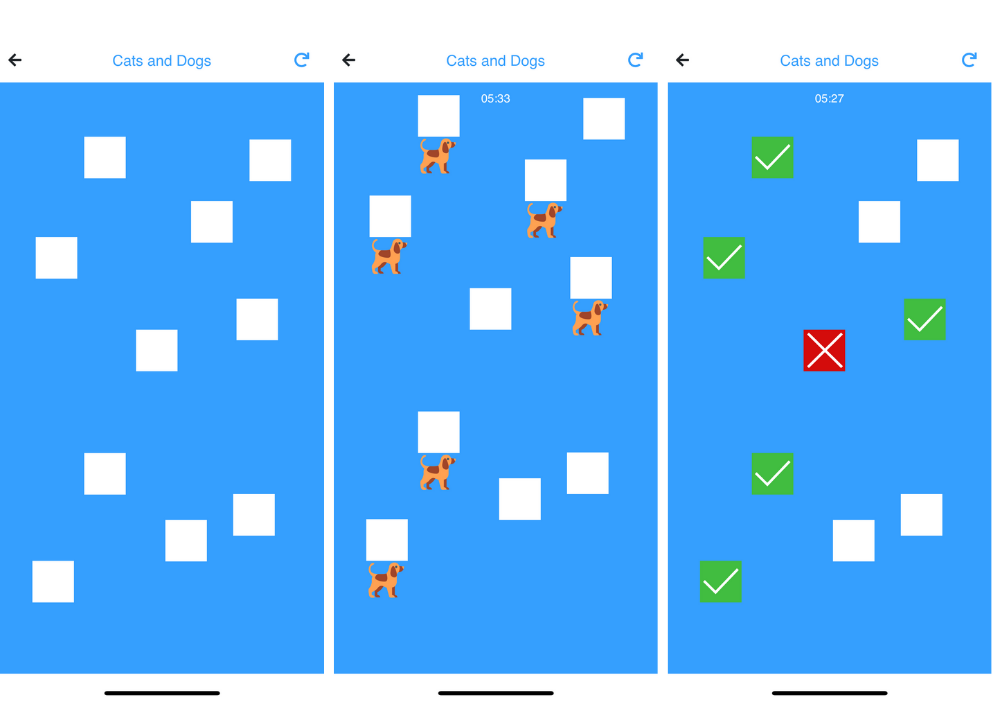 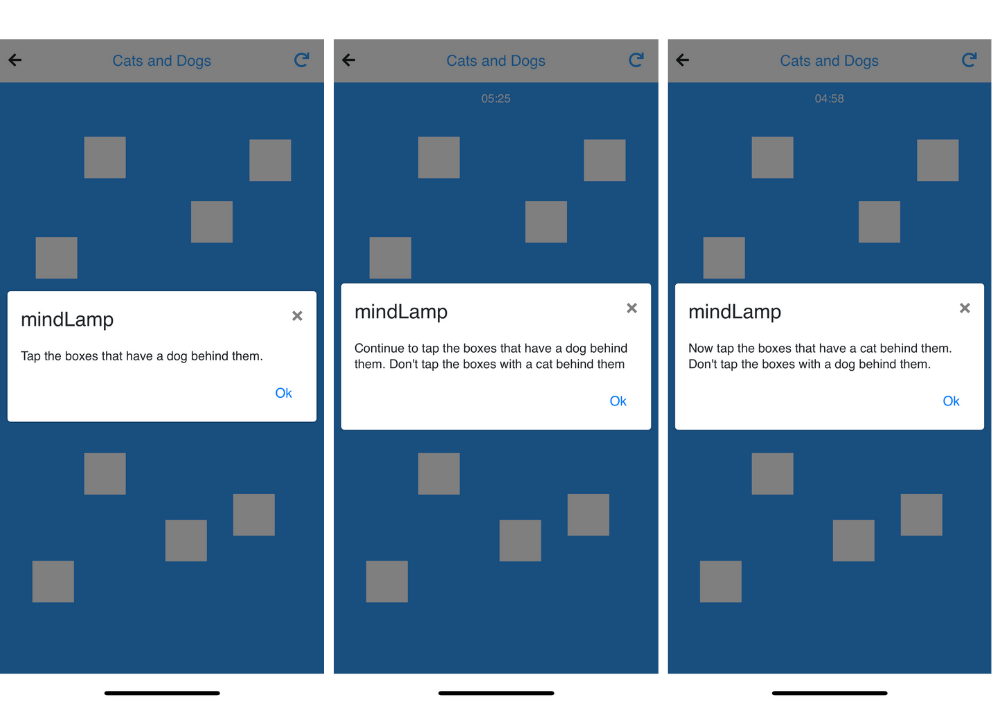 "In this game, you will see a screen with many boxes. These boxes will 'lift', revealing either a dog, cat, or nothing behind them. Your task is to tap the correct boxes, based on what is behind each box. The instructions for which boxes are correct will change depending on the level, so pay attention to the animals!"

Pop the Bubbles is a type of go/no-go task that can measure sustained attention and response control. Go/no-go tasks typically require a response to one stimulus, and response inhibition to another stimulus. 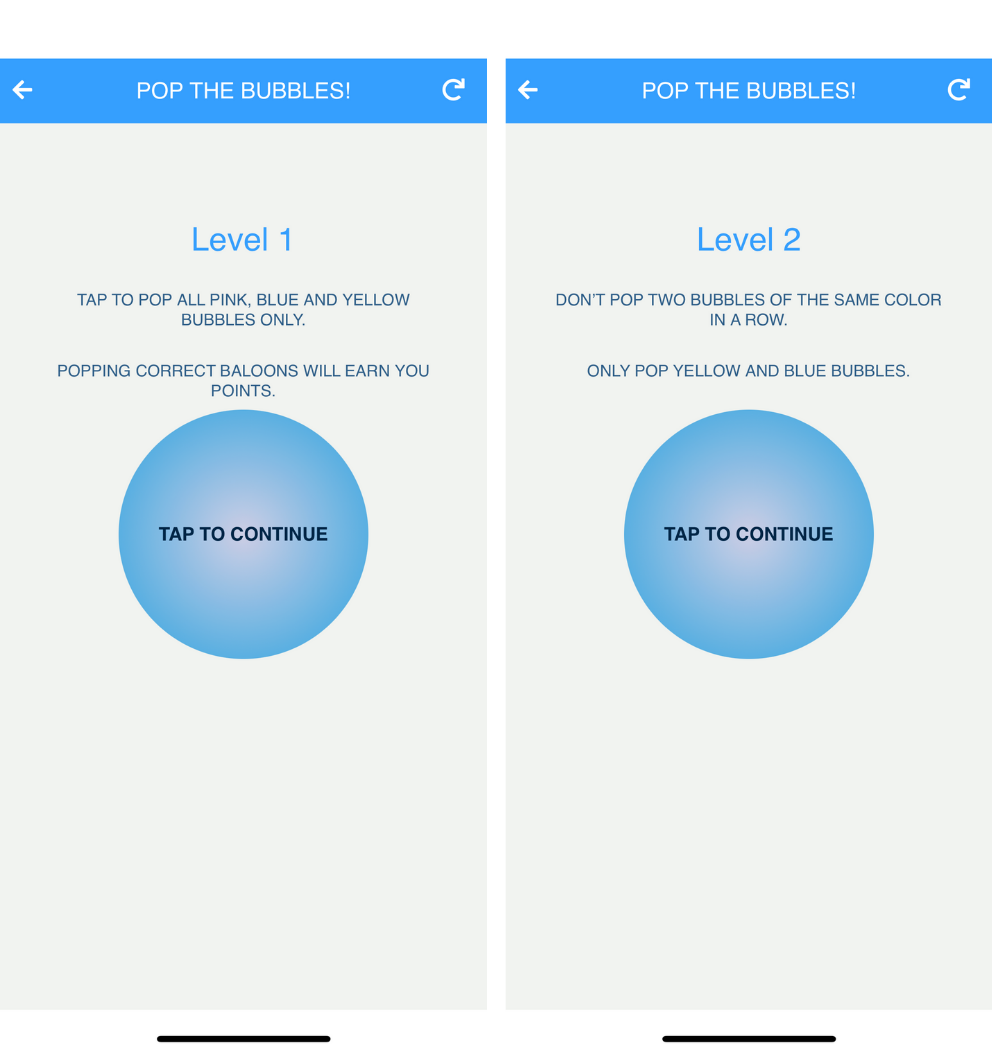 The task can be customized by the clinician or researcher in the Activity settings, to adjust the speed at which each bubble is presented, the number of bubbles shown for a given level, and the duration between bubbles. 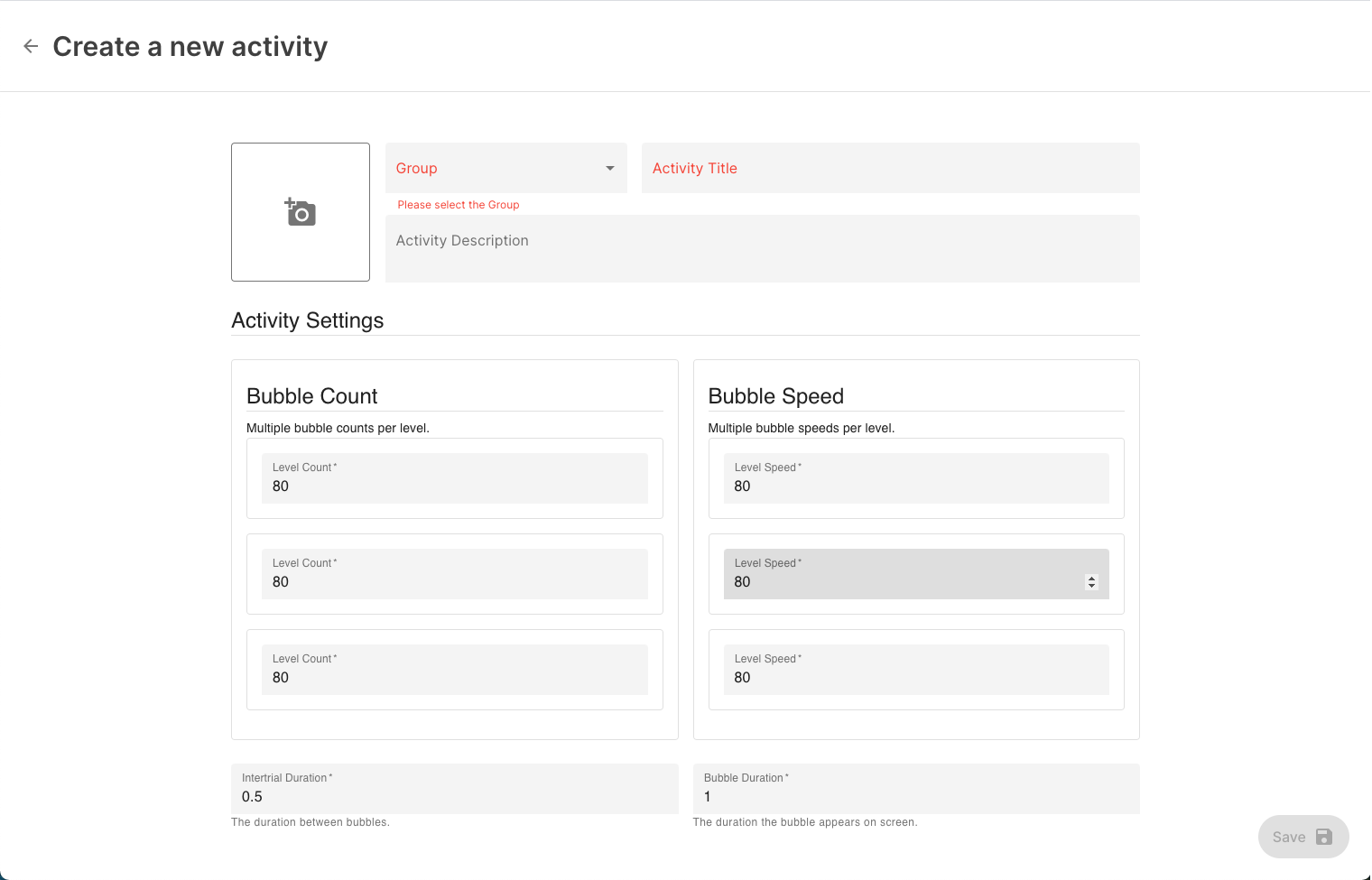 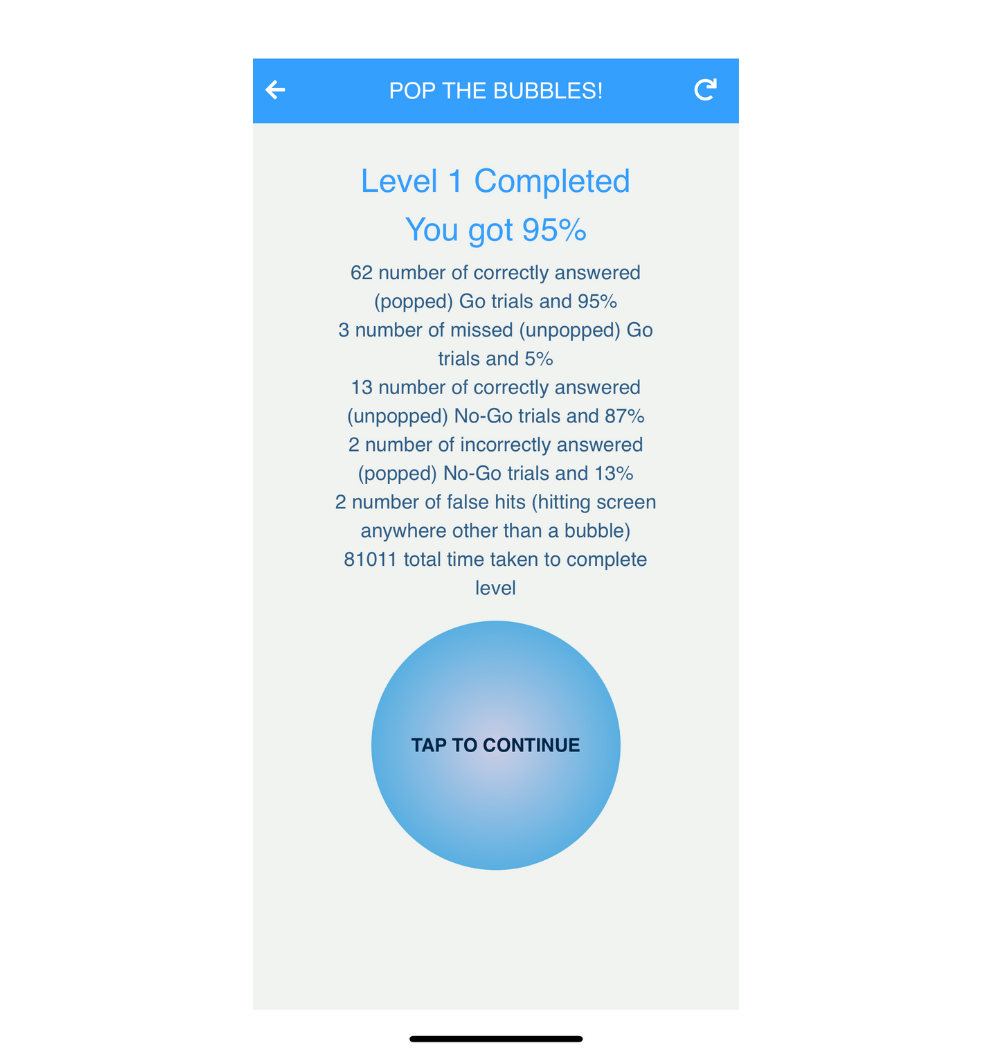 Balloon Risk, or the Balloon Analog Risk Task is a risk-reward task, in which participants must tap to inflate a balloon to the largest possible size without it bursting. The task has been successfully used as a computerized assessment for risk-taking behavior. 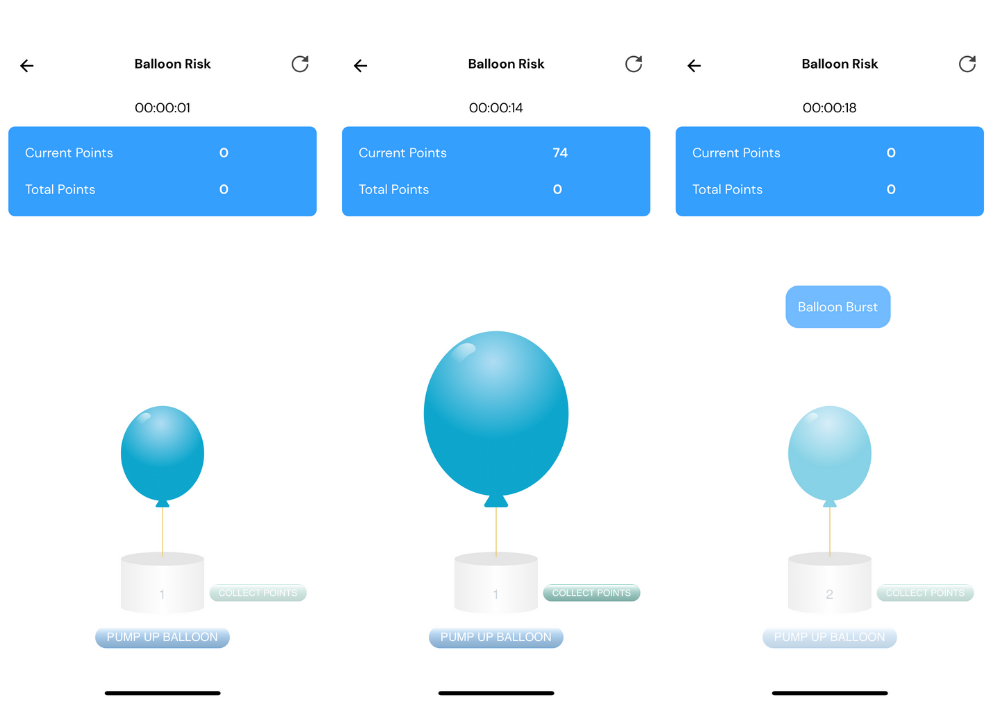 Balloon Count: This will change the number of balloon trials required to complete the task. 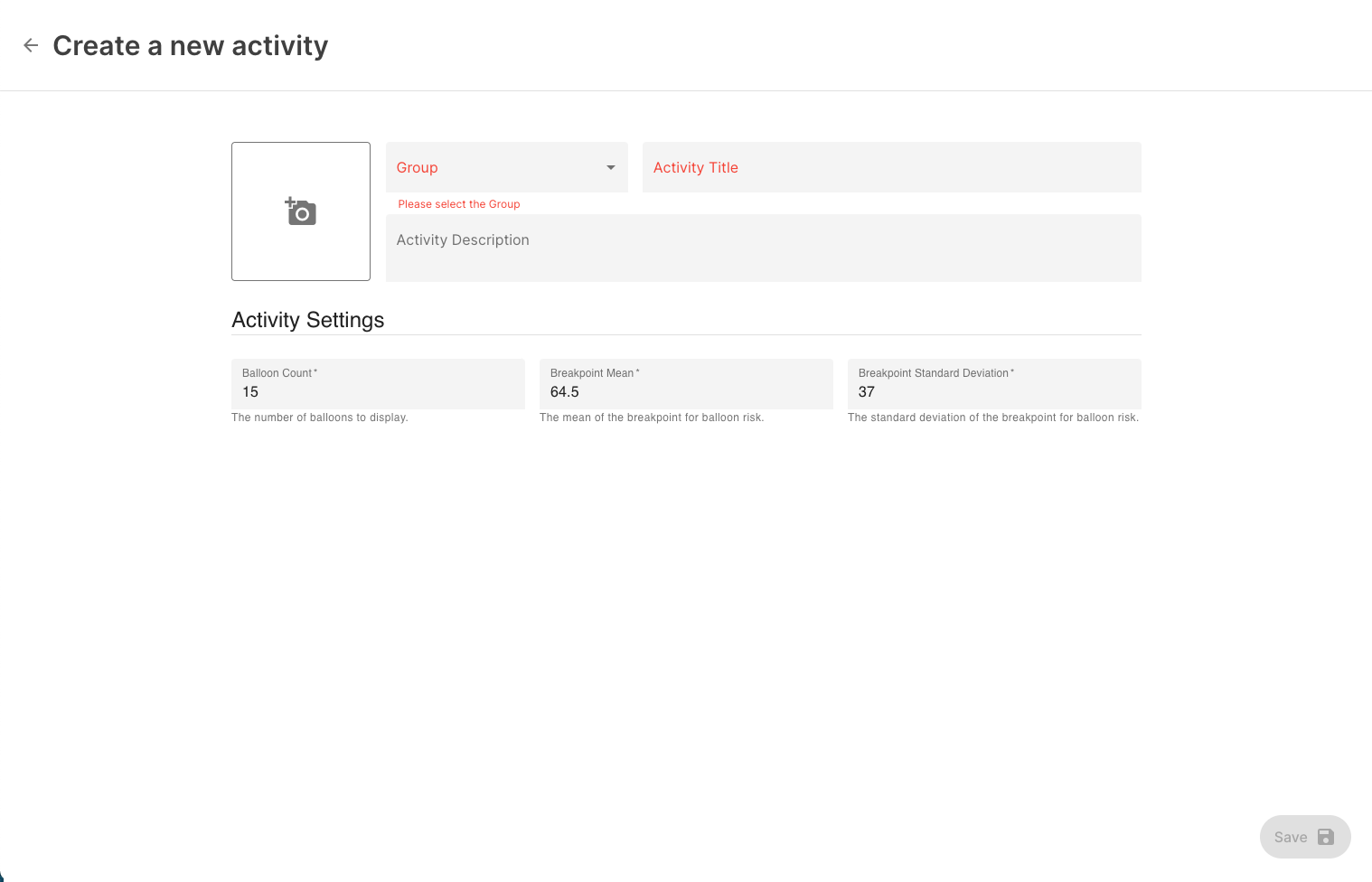 Participants are given points based on the number of taps they made before they stopped inflating the balloon, or no points if the balloon burst.